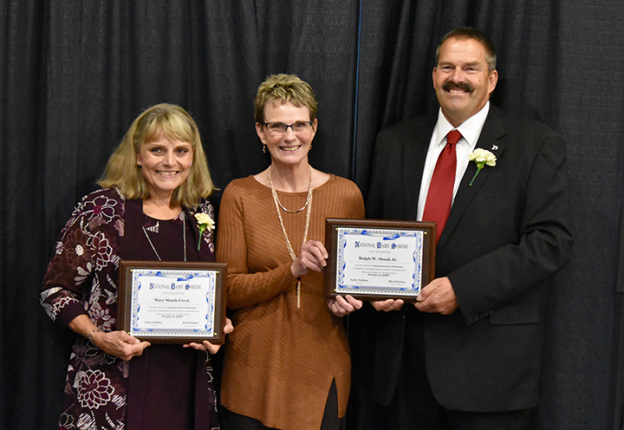 The brother and sister team of Ralph W. Shank Jr. and Mary Shank Creek of Palmyra Farm, Hagerstown, Maryland, have been selected as the 2019 recipient of National Dairy Shrine’s Distinguished Dairy Cattle Breeder award. They are the first brother and sister breeder honorees in the 70-year history of Dairy Shrine. This award is presented annually to an active, progressive dairy producer who excels in the management of a dairy breeding herd based on sound business and genetic principles.

Ralph Shank Jr. and his wife Terrie and Mary Shank Creek and her husband Mike own and operate this respected Maryland farm with their children and grandchildren, who now represent the fourth and fifth generations on this family farm. While Palmyra Farm is best known for its outstanding Ayrshires, it is also home to a few registered Holsteins and Jerseys. The family currently milks 81 cows and raises 132 heifers after downsizing their herd late last year. All of the milk cows are housed in a free-stall facility and milked in a double 7-herringbone parlor. The herd is on production testing and has been classified for nearly 60 years. They use all A.I. bulls in their breeding program, 70% of these young sires.

Ralph and Mary’s goal has always been “to breed the complete cow – milk, genetics, type, show and the ability to transmit”. Cow families have always been at the heart of this respected and successful breeding program.

As a result of Ralph and Mary’s breeding philosophy, and emphasis on solid cow families, they have placed 77 Ayrshire (and 16 Holstein) bulls into A.I. units. Palmyra Tri-Star Burdette, a high production and type bull, has some 6500 daughters in over 1600 herds and has been prominent in moving the Ayrshire breed forward. “Burdette” has been Premier Sire at World Dairy Expo the last four consecutive years. Another bull, Palmyra Tri-Star Reality, is having the same influence on the future of the breed siring four of the top 20 bulls in the December 2018 Active A.I. Bull list.

Over 100 Palmyra bred cows have appeared on the Ayrshire Elite Cow Performance Index (CPI) list, including 42 in one round. Ten cows have ranked number one. The breed’s current CPI leader (December 2018) is Palmyra Berkely P Ruth-ET (Ex-94), who was grand champion at World Dairy Expo in 2017 and 2018. Ruth was also the Total Performance winner at Expo in 2018 and is a three-time unanimous All-American. She is a full sister to Palmyra Berkely Reagan who has been the most heavily sampled Ayrshire young sire in the U.S. with over 20,000 units of semen sold. Already a sire of sons, “Reagan’s” first daughters are now milking. Palmyra Farm has bred over 100 cows with lifetime production totals of 100,000 lbs. milk or more, at least 20 with over 150,000 lbs. milk, and five with over 200,000 lbs. milk. Palmyra was the first Ayrshire herd to utilize embryo transfer in theUnited States. They have exported embryos to ten foreign countries, thus distributing that profitable Palmyra performance to Ayrshire breeders around the world.

Shank and Creek have been very active in the community, dairy industry and breed organizations. They have been strong supporters of agriculture youth programs. They have hosted 13 student interns. They welcome many tours and visitors to their farm every year, in addition to hosting classification workshops and judging practices. In 2009, they and their families launched Palmyra Farm Cheese, producing uniquely flavored Cheddar cheeses from their award winning Ayrshire cows. Today their business plan emphasizes diversity through selling genetics, breeding stock, boarding animals and the further development of their Palmyra cheese brand.

Ralph and Mary are a humble team. While Ralph stays closer to the day-to-day aspects of the farm, Mary is a global ambassador for the Ayrshire breed. Mary is currently a member of the U.S. Ayrshire Breeders’ Association Board of Directors and is chair of their Breed Improvement and International Marketing Committees. She was World Ayrshire Federation President from 2012-16 and is a past president of National Dairy Shrine. She has judged shows locally and internationally and 2015 judged the Ayrshire Show at World Dairy Expo. In 2012, she was recognized as World Dairy Expo’s “Woman of the Year”. Ralph is a past president and director of the Maryland Ayrshire Association, past chair of the National Ayrshire Youth Committee, and along with wife Terrie chaired the 1998 National Ayrshire Convention. He has won both the National Ayrshire Young Breeder and Young Leader awards.