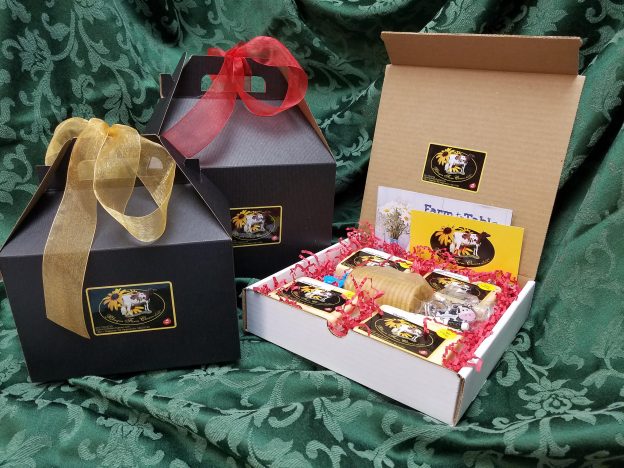 Looking for the perfect holiday present? Why not send the gift of Palmyra Cheese? You can order your gift boxes directly through our SHOP!

Cow families have always remained at the heart of Ralph Shank Jr. and Mary Shank Creek’s successful breeding program. Along with Shank’s wife Terrie and Creek’s husband Mike, they own and operate Palmyra Farm in Hagerstown, Maryland, in addition to their children and grandchildren who are the fourth and fifth generations on the family farm.

The siblings’ dedication to the Ayrshire breed and its future has been nearly immeasurable. In honor of their hard work and success, they have been selected by the Klussendorf Association as this year’s recipients of the Robert “Whitey” McKown Master Breeder Award. This prestigious award honors exemplary breeders who have been successful at showing and judging dairy cattle. Winners embody qualities associated with the Klussendorf Award, including character, ability, endeavor, and sportsmanship. This award will be formally presented to Shank and Creek during the International Ayrshire Show on Wednesday, October 5 at World Dairy Expo.

The long list of Palmyra bulls placed into A.I. displays their dedication and strong breeding philosophy, totaling 81 Ayrshires and 16 Holsteins. Palmyra Tri-Star Burdette is a high production and type bull with over 6,500 daughters in 1,600 herds and has been a key player in the progress of the Ayrshire breed. To round out his accomplishments, Burdette was the Premier Sire at World Dairy Expo for seven consecutive years from 2013 to 2019 and has sired national champions in seven countries.

Excellent cows pair well with proven sires, which is why nearly 200 Palmyra cows have been listed on the Ayrshire Elite Cow Performance Index (CPI) list, including 42 in a single round. Additionally, 10 of their cows have ranked first. Palmyra Berkely P Ruth-ET (EX-94) is a former top CPI leader and a two-time Grand Champion at World Dairy Expo. She went on to become the Total Performance winner at Expo in 2018 and a three-time unanimous All-American. Her daughter was named Intermediate Champion and Reserve Grand Champion of the International Ayrshire Show at World Dairy Expo in 2021. Ruth’s full brother, Palmyra Berkely Reagan-ET, has been the most heavily sampled Ayrshire young sire in the U.S. with over 20,000 units of semen sold. He is following closely in Burdette’s footsteps, receiving his first Premier Sire banner in 2021.

To match their success with breeding productive cows, this duo has also found success in the showring. Shank and Creek have been Premier Breeder 11 times, Premier Exhibitor nine times, and have shown Grand Champion cows three times at the International Ayrshire Show at World Dairy Expo. They have won Premier Breeder and Exhibitor banners numerous times at the All-American Dairy Show and Maryland State Fair. To date, they have earned 158 All-American Ayrshire nominations and achieved 49 All-American designations. Among these nominations are seven consecutive generations of Palmyra’s Ginger family. In 2011, they were recognized with the Ayrshire Master Breeder Award. Further, they have received multiple Ayrshire French production trophies and a Constructive Breeder Award.

As important as excellent breeding is to this family, they also have a passion for supporting their community, the dairy industry, breed organizations, and agriculture youth programs. Over the years, they have hosted 19 student interns from 10 universities. They strive to connect with the community by hosting many tours and visitors to their farm every year, along with many classification workshops and dairy judging practices. To add to their portfolio of endeavors, they launched Palmyra Farm Cheese in 2009, which produces unique Cheddar cheeses from their Ayrshire cows.

Shank and Creek have held several leadership roles and titles. Shank previously served the Maryland Ayrshire Association as a president and director. He was also chair of the National Ayrshire Youth Committee and chaired the 1998 National Ayrshire Convention along with his wife.

While Shank stays closer to the day-to-day aspects of the farm, Creek is a global ambassador for the Ayrshire breed. She has served on the U.S. Ayrshire Breeder’s Association Board of Directors, was the World Ayrshire Federation President from 2012 to 2016, and is a past president of National Dairy Shrine. She has judged shows locally and internationally, and in 2015, she judged the International Ayrshire Show at WDE. In 2012, she was recognized as World Dairy Expo’s “Dairy Woman of the Year”. To round out their success, they were presented the National Dairy Shrine’s Outstanding Breeders Award in 2019.

Shank and Creek are a humble team. They have forged their way to the top of elite Ayrshire genetics, and no job or task along the way has been too small or insignificant. No matter their accomplishments in the showring or on classification days, they never forget to support those around them and to ensure the whole breed is making progress. Their dedication to the Ayrshire breed and dairy industry is admirable and has now earned them and Palmyra Farm the title of the 2022 McKown Master Breeder Award winners.

The Robert “Whitey” McKown Breeder Award was made possible by the family and friends of the 1997 Honorary Klussendorf honoree after his passing in 2009. McKown joined the Holstein World staff in 1956 and became widely respected as he traveled nationally and internationally, reporting on shows, sales, meetings, and other Holstein events. The 1987 National Dairy Shrine president also developed McKown Holsteins at Belleville, N.Y. He had great admiration for the farmer breeder. 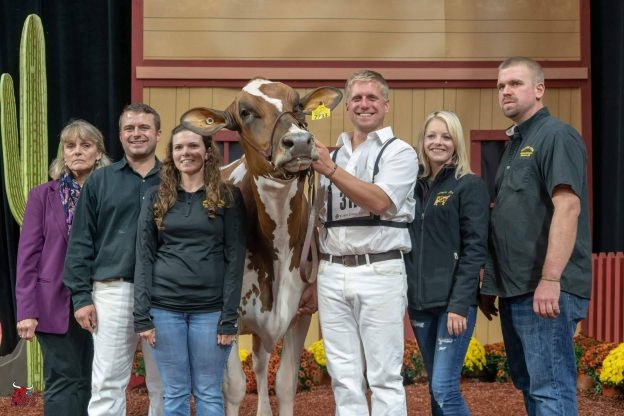 If you are lucky in this life you can live in moments of time where your dreams come true.

Ruth was special from the day she was born, big but not too big for a heifer, then Junior Campion at MD State Fair 8 months pregnant. She calved in October right after mom judged Expo full of potential, athletic, youthful, and not lacking for spunk.

At 2 years she showed just once but afterwards everyone knew her name. For the next 2 years that followed she did her job at home & in the ring and loved every minute of it. She was strong, smart and had personality, she loved her people, her feed bunk and pasture and being stalled with Dare Bear. She milked and bred back and held the title of #1 Genetic Merit Cow at the same time she reigned as Champion. She was small town famous all at the same time, with folks in Hagerstown that knew nothing at all about show cows checking Facebook to see how she performed.

She left us as strong and full of personality as the day she was born. There are those that have that something special that you only know when you see it and Ruth had it to spare. Though we are heart broken we know she is with Bruis Bonnie on top of the hill in green pastures watching over the farm and the family she loved.

Michael, Mark and Evan Creek of Palmyra Farm in Hagerstown, MD were honored as the 2020 Outstanding Young Ayrshire Breeders by the Ayrshire Breeders’ Association. This award annually recognizes young breeders who are making significant contributions to the Ayrshire breed and dairy industry.

Each member of the trio plays an integral part in the operation of Palmyra Farm in some manner. All participate in mating decisions, and all share enthusiasm in exhibiting Palmyra Farm cattle. Evan is a professional cattle fitter, sale manager and cattle hauler. On the farm, he is in charge of the show string management, the cattle that are boarded at Palmyra for others, the reproductive program and management, and is an important part of the day-to-day operations when he’s home. Mark’s responsibilities at the farm include helping manage the feeding programs and assisting with general operations such as milking and maintenance. He also works off the farm in landscape concrete and finishing. Michael is the Regional Operations Manager at Trans Ova Genetics in Boonsboro, MD, the majority owner of the Prohibition Hub Bar & Restaurant in Hagerstown, MD, and majority owner of Palmyra Farm Cheese, the cheddar cheeses made from Palmyra Farm milk. He helps to manage the
marketing of the Palmyra brand, manages their milk market through Palmyra Cheese, and helps with some business planning for Palmyra Farm. Michael also judges dairy cattle shows from local to international levels.

Each of the brothers has bred and owned animals that have achieved recognition for outstanding production, leaders on genetic index lists, and show winners and All-Americans. They have been the breeders of cow families that have put numerous bulls into A.I. studs, with the most notable being Palmyra Tri-Star Burdette-ET and Palmyra Berkely Reagan-ET.

As fourth-generation Ayrshire breeders, the brothers see a bright future for the breed. The moderate size of the Ayrshire gives her an advantage of allowing her to fit into many different management structures. “Burdette” had a hand in turning feet and legs into a strength for the breed, and they feel the Ayrshire remains one of the best uddered breeds.

The brothers feel the breed needs to work to increase the national herd average to high component milk production, avoid haplotypes, increase and promote genomic testing to improve its accuracy, and increase the percentage of the national herd that carries the A2A2 gene. They say we must also continue to find inventive and inclusive ways to market the adaptive abilities of the breed to commercial dairymen, small dairies looking to enter direct-to-consumer markets, or youth who are interested in a new dairy project for 4-H and FFA.

Provided by the Ayrshire Breeders’ Association